The hike started at an old gravel train track which had been there for over 100 years.  The wooden rails ran far into the distance until they faded into the horizon.  Looking up, I could only see a steep incline covered in tall green trees and rock, smoothed down by glaciers that had been in the area hundreds of years before.  I slowly made my way up to the first trail that led to The Lower Dewey Lake.  It was an open trail dense with foliage and smooth paths.  After passing the lower lake, a loud rushing sound filled the air.  It was a large stream running down hill filled with jagged rocks and ice cold mountain water. Water so clean you could bottle it and get $3 a pop for at Whole Foods.


I began my assent to the Upper Lake.  The trail began with a sign, "Upper Dewey-2 Miles."  The lower trail system was smooth but steep, this was a completely different beast.  The incline was about 35 degrees and the switch backs led to tight corridors that had been created decades before.  In the distance was a constant "hoo, hoo, hoo."  Surely it was an owl somewhere in the distance, but you could not quite locate where is was for the echoing through the cliffs and trees made it nearly impossible to zero in on.


Up and up I went, head down looking at the unstable terrain in front of me.  Looking up to see what was ahead was just long enough for you to lose your footing and slip on one of the slick pieces of rock under your feet.  Periodically, when the trail would smooth and flatten slightly, I would stop and look out away from the mountain.  This was truly a reward.  Across the mountain was the inlet that we arrived in and passed that were parts of the great mountain system.  Tall peaks covered in thick white snow standing there unchanged, just as they were thousands of years before.  Well before man had come to the area.


I continued to climb what seemed like forever until I hit the first hints of snow on the trail.  In certain spots the snow blocked the trail completely, forcing me to move along the steep sides of the trail, or trek directly through the cold wetness.  The trail eventually gave way to complete packed snow, and this is where it became dicey.  The snow had faint tracks stamped on top that were easy enough to follow, however, the deep snow gave way periodically, sending you onto your face, and you leg into a three foot pack of ice and snow.   Undeterred, I continued to climb, sometimes on my hands and knees, but always forward and up.  I eventually came to a clearing where there were very few trees and there were open gaps of untouched snow.  I sat down for a minute to gather myself, and to look out at nature. 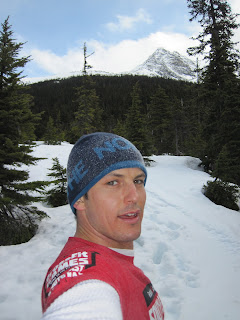 I had travelled as far as I could on the tracks that were left behind by others.  I now had to choose where I wanted to go.  I continued on up the mountain until I came across some tracks again, only this time, they did not look human.  Wide, round tracks lay in front of me, stomped down by something big and heavy.  They looked pretty fresh too.  At this point I decided to turn back and head back down the mountain, seeing this as a sign.  It took 45 minutes of downhill running to get back to the bottom of the trail.  At which point the weather had turned it became cold and windy.  The cold cutting to the bone in my sweat soaked clothing.  I looked back up at the trek I had just taken, and I smiled a grin of satisfaction.


Though I did not reach the lake, I had gotten what I had come for:  a journey, and that is truly the reward.