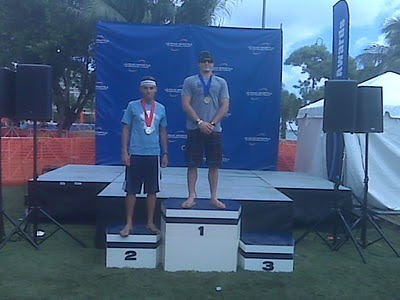 Sunday was the Escape to Miami Triathlon. I signed up for this race in June, but between then and the race I started to shift my focus to Crossfit and strength training. I did not want to re-neg on my commitment, so I decided just to switch from the Olympic distance to the sprint.

Saturday night I ate an extra sweet potato with dinner and went to sleep. I awoke at 2am and couldn't go back to sleep. My mind was too consumed with pre-race jitters and thoughts of not being able to finish due to my lack of actual triathlon training. With 4 hours of sleep under my belt (a PR!), I left for Miami and arrived to set up my transition area at 6:30am, a full 2 hours before my wave would start.

I entered the Key Biscayne waters at 8:48am for the swim. When the buzzer went off to start my wave, I felt an wave of calm come over me, like I had been there plenty of times before. I decided to go at 80%, not going slow but not redlining either. Relaxed and a little sore, I exited the water and started jogging over to my transition area.

As soon as I jumped on my bike, I remembered exactly what I wanted to do...go out hard. Since the bike is only 24km long, I knew I had to make up time from the swim and run there. I sank into a nice speed at about 24mph, and started banging out solid splits. The headwind was a little tough going out, but it was no match for the newbies around me taking up most of the road. I took advantage of the causeways, not losing my cool on the way up, but turning on the juice as soon as I reached the top to gain maximum speed on the way down the other side.

I rolled back into transition with a tough competitor in my sites. 100m ahead of me, I stalked my opponent. Though a little sore in the hamstrings, my technique felt good. "Out and back 5km, and I am finished," is what I thought to myself. When I made the first turn, I realized that I didn't do my homework. In front of of me was a string of athletes all slowly jogging or walking their way up a steep, half mile long causeway. My opponent did not break stride, and neither did I. "I am part mountain goat compared to these southerners, coming from the rolling hills and steep summits up north," I thought to myself. I continued pulling my feet up the hill, and when I reached the summit, I saw my opponent only 25m away. It was time for me to close the gap. I reached and passed my opponent by the bottom of the hill, but he stayed on my heels. We reached the turn around, and I really felt the heat starting to pound from above. "Just another workout," I thought. Starting back up the hill, we were still neck and neck, but I let my rival pull for a while, allowing him to pass by. My move was to put the pressure on as soon as we hit the top, blindside him with a burst of speed. We hit the top, and I increased my lean and turnover....he followed me step for step. We made the turn back to the finish, and I told him this was going to be a tight finish. I continued to put pressure on, but with 1km left, I slowed down to store some energy for the final 200m sprint. I thought that he would jump ahead, but he was crafty and stayed right where he was. I knew he was thinking the same thing I was.

We made the turn down the finishing shoot, and I made my move. I started to pull fast and increased my lean, but as I did I noticed my hamstrings were roasted. Just as I increased my speed, my rival made his move and blew right past me with 100m to go. I thought for a split second, "Get him!" I quickly put aside those thoughts, knowing that redlining here could mean a full week's recovery. I let him off easy and he cruised to the finish line. I ended up taking 5th overall (out of over 500 competitors) and 1st in the 18-24 age group in the sprint division.

Not bad for someone who has trained in triathlon for a total of 5 hours in the last month. This experience taught me something about myself. I am always going to be able to go long. Its something that some people just have. In Crossfit, the longer workouts are always going to be in my wheelhouse. With this peace of mind, I can now focus on getting as strong as I can be. To become a more complete Crossfitter. My sights are set....November 13th Big Dawg. Get some!!!!!
Posted by Sean LeFloch at 7:54 AM