Posted by Sean LeFloch at 2:23 PM No comments:

Posted by Sean LeFloch at 10:00 AM No comments:


My first time trial. I am worried that my form may suffer from this workout, because for me, like my golf swing, my stroke comes and goes. Some days it is clicking and my butt is on top of the water, and then other days I feel like I am swimming uphill. Pumped for a good performance though.

The time trial went well. After warming up and doing drills for around 12 minutes, I started the 20min time trial. At around 800y, I felt my lats melting, but focused on form and technique rather than the pain. Despite my foot cramping twice during the swim, I managed 1375y, or about a 1:30/100y pace. I was pleased with my effort. My form held up rather nicely throughout the swim. I focused on three key elements: 1) looking down at the bottom of the pool, instead of at the wall in front; 2) extending to air and rolling as the arm enter the water, rather than lifting my head; and 3) setting the high elbow, holding, and using that as leverage to thrust my opposite arm forward.

Posted by Sean LeFloch at 9:34 AM No comments:

Robb Wolf's new podcast is up....
Posted by Sean LeFloch at 1:35 PM No comments: 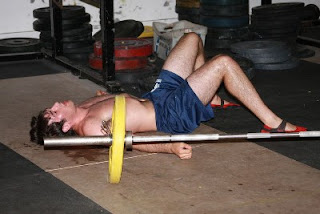 One of the things I constantly see on videos and in the box/gym are athletes who have completed WODs and collapse on their backs, staring at the ceiling, struggling to breathe. In wrestling, we always had a saying, "Never count the lights" since seeing the lights in wrestling is never a good thing(Most likely you are about to be pinned). I take this mantra into training. As bad as I feel after the toughest workouts, I promised myself I will never lay down like a dead dog. You shouldn't either.
Posted by Sean LeFloch at 12:21 PM No comments:

WOD:
Jump Rope Barefoot 5 min., mixing in variables of DU's, Cross Overs, single foot, running.
5 - 7 wall walks (start standing up with your back to the wall about 3 feet away. Lean back until your hands come in contact with the wall. Walk your way down as deep as you can. Reaching the floor is your ultimate goal. Walk back up the wall with out falling. That is 1 wall walk). Rest as needed between. OR 5 Bridges for 30 second holds, rest 30sec to 1 min between.

Notes: Today's WOD was tough, but fun. I didn't get the 25m on the broad jumps on one set, so I tacked on an extra 25m at the end. If you workout in Vibram 5 Fingers like me, beware of smashing your heels against the ground during the broad jump! Later in the day came the CFE WOD. I did 10 minutes of drilling that included wall lean then jog, trailing opposite legs, and run in place to lean for speed. The first 3 intervals had decent times, I felt like I was putting in a lot of effort with little return. On the last interval, something clicked. My feet felt lighter and I didn't feel like I was pushing off at all. What did I do? Well, I noticed that in the first 3 intervals I was leaning in my traditional way, with shoulders in front of toes. On the last interval, I felt like my head stayed back and my entire torso was leaning forward (SEE PHOTOS ABOVE).

Posted by Sean LeFloch at 10:29 AM No comments:

Notes:
My back squat weights were: 210, 215, 225, 235, 245- I was a little scared putting heavy weights on at first, since the last time I back squatted was before I started training for triathlons. In college, I remembering my PR being around 320, but I was also around 10 pounds heavier, and I was squatting 2-3 times per week. I warmed up with deep air squats holding for 10 seconds at the bottom, plenty of stretching, and rolling out with a foam roller. After the squats, I completed the 2 min L-sit and the 5x1min handstand, leaning against the wall of course. I had never attempted these two isometric movements before, but instantly my muscles were on fire. I can see how this translates to triathlon, because it is an extreme example of being in an uncomfortable position for a prolonged amount of time, like being on the aero position on the bike.
The tabata workout was something I had done before. After a 20 minute warm-up, which included drills and spin-ups to get the blood and a steady sweat flowing. The 8x20sec goes are very taxing on the heart, lungs, and muscles of the legs. While doing it, it is miserable, but after a 10 minute cool-down, I was back to steady-state again. I have always had mixed feelings with short intense burst workouts like these, because I feel I recover very quickly, and I can't see how this would translate. But I guess the idea here is that you can't push yourself that hard for a prolonged amount of time without your body breaking down. And its like squeezing a half-hour of sprint/recovery work into 4-5 minutes. I feel uneasy with this idea, but I am going to follow the protocol. DAY ONE IN THE BOOKS!
Posted by Sean LeFloch at 9:58 PM No comments:

Yesterday, I attended the Crossfit Endurance Certification in Westwood,NJ at the Crossfit Ignite box, owned by Stephen Macioci and Tina Harris (Thanks again for hosting!). This was my first exposure to the coaches and athletes of Crossfit Endurance, so I didn't know what to expect. Teaching the cert were Max Wunderle and Tim Hill.
The first day was devoted mostly to introducing Pose Method running. I was in the Evolution Running camp, having bought the DVD, and spent many hours drilling with their methods of landing directly underneath the center of mass, with a forefoot strike and a pull through using the glute and upper hamstring. I was torn, knowing that I have seen success with this method, but the more I looked at myself running, the more I noticed the differences between myself, and elite runners. As is the case with any triathlete, I want to be an elite runner. After spending countless hours on youtube and comparing the various methods and reading the millions of testimonials, both for and against Pose Method, I came to this glaring fact: what is easier to do, push 170 lbs. off one leg to go forward, or pull your foot off the ground to allow gravity to pull you forward? Nuff said, I was sold. Though transitioning from my old running style to Pose Method is like learning to write with your left hand, I take solace in the fact that this method has been used by the world's most elite runners for many years, it just never had a name.
The second day was review of Pose and the introduction to our new training protocol. I, like some of the other triathletes in the room, were used to the conventional way of training, mixing volume and intensity, and putting in 15 hour plus weeks, seeing marginal gains and beating down our bodies in the process(See my last 3 months of training). What Max and Tim presented was, to me, a completely radical way of training: Crossfit will be your base, 6 WODs per week, and you will add 2 Crossfit Endurance Workouts per sport per week. WOW. I was blown away, how could this work? This is heresy! Obviously, I had tons of questions to ask(I thank everyone who was at the cert for putting up with my idiocy and lack of trust). But think of it in my perspective, I have read tons of literature, researched training protocols by elite athletes, and have had success with what I was doing. Why should I change, why is this better? There are a bunch of questions that I asked and I will post the answers at another time, for this post is getting rather lengthy, but the light turned on for me when Max mentioned that elite triathlete Matt Reed trains at high intensity 80% of the time. So if he trains 20 hours a week, 16 of those hours are intense efforts.
So intensity is key in creating a great endurance athlete, but if you asked Matt Reed if he does long rides/runs/swims at low intensity, he would probably say, "Of course." And if you asked him if he did short high intensity Crossfit style WODs, he would say, "Absolutley not!"
Which brings me to the purpose of creating this blog. If you follow Crossfit, you have seen the night and day changes of taking couch potatoes and turning them into healthy athletes, and even taking good athletes, and diversifying their athleticism into endurance sports (finishing marathons, ultramarathons, and ironmans). What I want to learn is if a good endurance athlete can be transformed into an elite endurance athlete by following the Crossfit Endurance formula. I will follow mainsite protocol to the T, share with you all of my training and nutrition, and most of all I will remain unbiased and honest to all that read and follow my quest. The CFE protocol is only 20 months old, and is constantly changing, but, to my knowledge, Crossfit Endurance has not created an elite endurance athlete yet, and I seek to be the first. I am the guinea pig.
Posted by Sean LeFloch at 12:43 PM No comments: